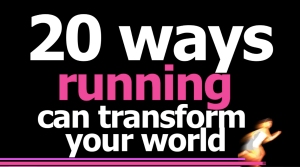 This interview is published on the UCL Art Museum blog

On 26th February there is the chance to meet the artist and Slade School PhD Graduate Kai Syng Tan and take part in her experimental, multidisciplinary event based around the positive powers of running. This is the opportunity to learn about running as a potentially playful and subversive activity within an artistic framework.

Kai is sprinting forward with latest research that focuses on the body and its dialogue with technology and social media networks. Her website creatively communicates this unusual project, which is constantly evolving. Come expecting to be made curious, surprised and energized.

Intrigued to find out more before the event, I met up with Kai to talk about how her work explores notions of playfulness, natural endorphins and the meaning of life.

You have many different roles and identities, being an artist, educator and researcher. How do you see them interacting and influencing each other?

Many artists today have multiple identities. I have been an artist for nearly 20 years, but I have done many different things within this role. It involves showing my work in public spaces and online in spaces not always considered part of the art world. As a new media artist I have also had a parallel career; lecturing is how I bring home the bacon.

It sounds as though you like breaking down boundaries between different roles.

Yes, there are boxes that you put yourself into, and this is an interesting challenge because it forces you to clarify your position about different things. But most artists like to be fluid about their identifies. The word ‘restlessness’ sums up my approach, especially in terms of how I use different media and resist having one single role or identity.

Is this breaking down of boundaries and multidisciplinary approach something people can expect from your talk on 13th February?

I’m calling it a ‘performance lecture’ because within it there is performance and it is performative – there is a script and I’m a character. It’s also a lecture because it is set in a lecture room, there are seats and a podium, and so on… I will probably wear a suit. I will also show a film I have made. The film is a kind of cinematic essay, so there is collage within the film and the event itself.

Have you been inspired by other creative people in this approach?

Yes, Walid Raad from the Atlas Group inspires me. He creates quite a sombre or austere set-up through a lecture format, but within that he skilfully incorporates fiction and different media such as film or photography. He even orchestrates for actors to be in his audience. So it is quite theatrical, yet also completely subversive and very playful. It keeps turning things round and keeps you guessing.

It sounds like you want the audience to be an active part of the event.

Yes, the audience will be engaged and working out what parts are fictions and what bits are facts. I will specifically be inviting them to run with me, metaphorically speaking… and maybe also literally speaking! I want them to actively collage or edit what I am performing. I am inviting them to re-read or re-map my work.

So does your work rely on spontaneity and evolve according to the type of audience you have?

Yes, it is structured, but I will also improvise. Sometimes I think of my role as a kind of stand-up comedian.

Is humour an essential part of your project?

Humour is a very important part of my work. With humour I associate notions of playfulness, of turning the tables and upsetting the paradigms that you set up. This keeps people guessing. You need a sense of humour and to be a bit mischievous, especially if things are difficult. This is something I talk about in my research – about how running can be a playful process for seeing things in a new way, being quite subversive and running against authorities. It is a way of letting your imagination run wild.

Has sport always held a fascination and kind of playful power for you?

There are different ways that I come at the idea of running. I have explored the notion of travelling, restlessness and of running away from home. If you come from a small country that might feel claustrophobic, physically and metaphorically, then you have to find ways to be able to have a bigger space. A lot of my artwork has always played with these ideas of trying to be on the run and making your own world bigger – literally and figuratively. This is how I came to the idea of running, opposed to walking. For example, when you are a kid you start running. It is very intuitive, but parents and teachers say, ‘stop running!’ So for me, running has elements of childishness, which is a positive thing.

What relationship do you see between running and walking?

I am proposing that running is better than walking. Running can give you a ‘run for your money’ because walking is so well researched, especially in art. We know about the work of the Situationists, of Benjamin, of Richard Long… we understand walking as a cultural tradition. We know it can be poetic, creative and political. But I think running can offer all this too. It is also relevant because there is a chemical process going on in running – endorphins can kick in. Within the English word, ‘run’, many idiomatic expressions can be made that offer room for new exploration. For example, ‘let your imagination run wild’, ‘be on the run’… I’ve been using a few of them already in this interview.

Do you think new technology affects our attitudes towards running and how we see the human body?

We definitely live in a technologically mediated world. A lot of us will go online to ask ‘Google’ about our bodies instead of listening to our bodies themselves. Technology has a lot to offer us, but the body has a lot to tell us too and this can be accessed through running. Running is immediate, everyday and tangible. It can teach us ways to become reacquainted with our bodies and that can be a kind of a counterpoint to the technological saturated world today.

One of the strengths of my research is to go back to the body and see what it can teach us. I explore what intuition can show us. This is how I bring in the performative aspects of running to my work – I am not just theorising the process of running in our technological world. Instead of always consulting the Smartphone, we can imagine how our body has lots of Apps as though we are a human Smartphone. There are many different Apps we can tap into.

Is this what the character, Kaidie, embodies in your performances?

Yes, she does embody these things. After all, runners are as light, as small and as compact as these technologies. We have stamina and batteries that can last us for a long time. The beauty about the body is that the more you train yourself, the better you can get and the further you can go – so the bigger your world can become. You have the energy to explore different parts of the world, including the online world. This is one of the metaphors I explore.

Why else did Kaidie run?

Kaidie ran to try and find the meaning of life. This is a bit of a Monty Python quest! She had a life span for 1,000 days. This was the number of days that marked the official count down for the London Olympics. It is nearly three years, not too long or too short. This life span gives my work a tangible, material aspect.

Kaidie died on the last day of the Olympics, so there is a real life element to the quest. She task was looking for the meaning of life online and offline. She was a restless figure running about freely, and running in the world of art. So on the day of the performance, it might not be Kaidie as such that is giving the performance, but there might be re-runs and re-visits of some of the aspects of her work.

Did you discover anything about the meaning of life?

No, the getting there is most important. The exploration should be fun, confusing and divergent. But it’s not very neat! I always play with the idea of how there could be lots of different possibilities. It goes back to my resistance of trying not to be pigeonholed and wanting to believe that there is a bigger world out there.

What have been some of the challenges of this project?

There have been many. One of the challenges has been to pick up running! Also, people have said to me that walking has such a huge tradition, so surely you can’t suggest that running can take its place. Some people are quite territorial about walking. Baudrillard, when looking at the New York marathon, said running has become meaningless because too many people are doing it. I think there is a prejudice against running… Some people even think there is a reverse correlation between physicality and intellectualism.

Have these events led you down unexpected paths?

Yes, they have. It has been hard to pick up running, but you do get better. This personal experience was very important for me. I discovered the role of happiness, because endorphins kick in when you run, which can be creative and also make you high (this is why it’s called the ‘runner’s high’). The level of happiness and how much it gave me as an artist, researcher and thinker was definitely unexpected.

It also made me think about how there is a narrative of melancholy and depression as creative states in art history. This is important, but I have discovered that happiness can be creative and give you knowledge too. It’s made me think that we could study the role of happiness in terms of art history and art.

So this is about changing the discourse of art and art history?

I think so. The way I wrote my thesis is quite playful. There is a lot of wordplay and collage, I don’t have a linear argument as such, and I jump around quite a lot. There is no conclusion at the end. I suggest to the reader that they re-map and re-collage my work.

All the images and photographs in this blog post are Kai’s.