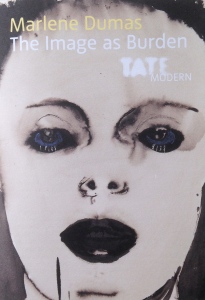 The title Naomi doesn’t determine the identity of the face in the painting, but it does invite a certain intimacy with the viewer. Naomi. Is this Naomi Campbell, one of the supermodels of our century? If so, this is our chance to really see her up close and even to be offered her full, sensual lips. However, there could be scorn in her narrowed eyes, emphasised by the sharply arched eyebrows. She could be rising defiantly out of the shadows away from our mundane world, although, equally, they could be consuming her. Like many of Dumas’s paintings, it is not clear and we are left to experience this uncomfortable position of not knowing or being able to confidently react to an image, even an image of a person whose form we know so well.

The purposeful lack of clarity to many of Dumas’s paintings partly stems from the fact that she often paints from second hand images, particularly those from the media. This makes her work similar to the result of Chinese whispers; the subjects evolve every time they are captured and communicated through an image that is not their original. Does this allow Dumas – and the viewer – to think about the image rather than the person and the emotions that surround them? This would certainly allow for a more critical engagement with the work.

Naomi seems to be a disturbing cross between a fashion illustration, a fashion photograph and an abstract figurative painting. The conflation of these different types of visual communication suggests that this painting is as much about how we construct and present images, particularly those of women, as it is about what the images themselves represent. It does prompt us to consider what sort of image of ourselves we present to the world each day.

Tate Modern currently displays the most significant exhibition of Marlene Dumas’s work ever to be held in Europe, open until 10 May 2015.