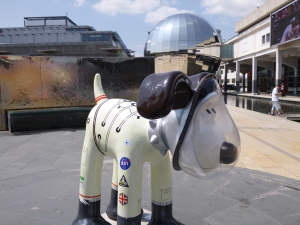 From the 18th to 22nd September a sensational exhibition entitled ‘The Greatest Dog Show on Earth’, will sweep into Bristol.

Inside the building that used to be Habitat on Queens Road, eighty larger than life Gromit statues will be displayed. They have been designed and decorated by artists, designers or companies (such as Peter Blake, The Beano, Pixar, and even Nick Park himself).

These Gromits were originally installed at various iconic landmarks as well as in more hidden places across Bristol. This was in a similar vein to the apes that were put up round the city last summer; the pig sculptures that appeared in Bath several years ago; and the original cows which punctuated various European cities during the 90s.

The Gromits are clearly more fun and accessible than the apes (which even managed to look sinister and slightly threatening). 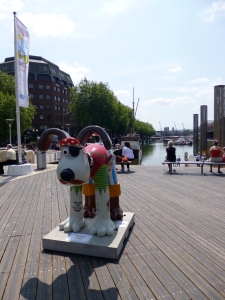 But why have the Gromits been such a success? There are many possibilities. Gromit is a character we can all immediately recognize regardless of our generation. He could arguably be called a British icon. Specifically, Gromit also has roots in Bristol, as he was created by Nick Park at the Bristol Aardman Animation Studios.

Unlike the apes, the Gromits appeared to reflect certain characteristics, landmarks or areas of Bristol through the way they have been decorated. For example, there was an Elvis Gromit (The King) near the Bristol Old Vic, and a pirate Gromit (Salty Sea Dog) at The Cascade Steps by the Harbourside. In Millennium Square, an astronout Gromit (called Astro Gromit) reflected the stark modern design of the space and the ‘At Bristol’ centre, which focuses on science.  END_OF_DOCUMENT_TOKEN_TO_BE_REPLACED